Charles was born on January 30 1915 in Victoria British Columbia as the son of Frank Maitland (deceased in 1943) and Gertrude Emily Kilner (both English) of Nanaimo British Columbia. His parents were married on October 8 1908 in Nicola British Columbia. He was the husband of Jean Kilner of Vancouver and they were married on April 30 1938 in Nanaimo and they had a son Gordon Maitland Kilner. His brothers were Donald Edward, Francis, Eyril Edmond (both army overseas too), and Douglas Kilner (also in the army). His sisters were Mrs. Dorothy Barbara Bentley, Mrs. Violet Casson Lawson and Gertrude Alice Kilner.
His profession was a mechanic and he was member of the Anglican Church.
He enlisted on September 6 1939 in Nanaimo British Columbia and he went overseas to the UK on September 2 1941 and he went thereafter to France for the D-Day landing as a carrier driver on June 6 1944.
Charles died of wounds on Friday June 9 age 29 in the D Coy near Putot en Bessin and he was temporarily buried there and on January 18 1945 reburied in Bretteville S/Laize.
He was awarded on September 23 1943 with the Efficiency Medal.
And his medals were: 1939-45 Star; France Germany Star; War Medal; CVSM & Clasp. 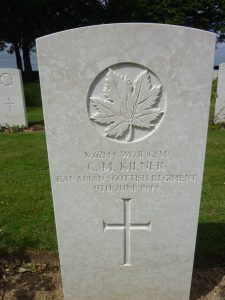 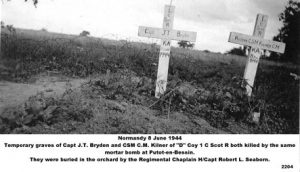