Sydney was born on February 13 1904 in Falkirk Scotland as the son of Joseph Edward and Alice Mary (deceased) Hill nee Regan. He was married on May 26 1936 with Olive Frances Hill, of Victoria, British Columbia.
He was a longshoreman and member of the Presbyterian Church.
He enlisted on September 7 1939 in Victoria and he went overseas to the UK on August 24 1941.
Sydney took part of the D-Day landing on June 6 1944 and he was after that wounded in the D Coy and presumed killed in action on Friday June 9 age 40 near Putot en Bessin.
His medals were: 1939-45 Star; France Germany Star; Defence Medal; War Medal; CVSM & Clasp.

His name is too at the monument in Putot en Bessin. 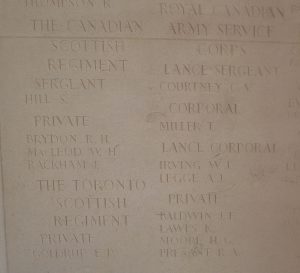 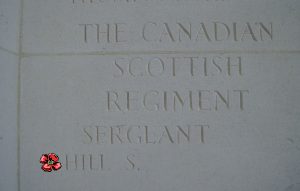