Ronald was born on May 17 1922 in Moose Jaw, Saskatchewan as the son of William J. and Elizabeth L. Jinks (both English), of Moose Jaw. His parents were married on April 24 1909 in Eastbourne England. His bothers were William Alfred and James Albert Jinks (who was in the navy).
He was a student and member of the Church of England. He liked sports as baseball and hockey and played mouth organ.
He enlisted on January 23 1942 in Regina Saskatchewan and he went on September 1 1943 overseas to the UK and he went thereafter on June 9 1944 as reinforcement to France.
Ronald was killed in action on Tuesday August 15 age 22 in the D Coy near Falaise and he was temporarily buried at 2 km’s East of Soulangy and reburied on May 17 1945 in Bretteville S/Laize.
At his headstone: Beyond the Sunset We Will Meet Again Mom Dad Bill and Jim
His medals were: 1939-45 Star; France Germany Star; Defence Medal; War Medal; CVSM & Clasp. 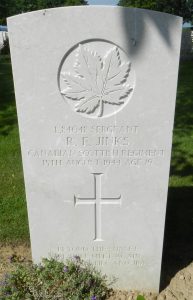