John was born on February 5 1918 in Victoria British Columbia as the son of James O’Connell (Irish and deceased in 1939) and Mary O’Connell (nee Kyle), of Victoria. His parents were married on August 5 1912 in Victoria. His brothers were Martin Patrick (in the army in Camp Borden too) and Michael Thomas O’Connell and his sisters were Mary Sheila and Ellen Ann O’Connell. His brother Daniel O’Connell died in 1914. His uncle was Frank Kyle.
His profession was a student at the St. Louis College and Victoria College and he was member of the Roman Catholic Church. He had been active in the International Relations Society of Victoria College. He spoke English and French.
He enlisted on September 13 1939 in Victoria and he went overseas to the UK on September 2 1941 and he went thereafter on June 6 1944 for the D-Day landing to France.
John died of wounds due to an accident with a mine on Saturday July 1 age 26 near Rots Le Hamel and he was temporarily buried in Le Hamel and he was reburied on February 5 1945 in Beny S/Mer.
At his headstone: JOHNNY “SOLDIER REST, THY WARFARE O’ER” MOTHER, SHEILA, MARTIN, ELLEN AND MICHAEL, MOURN R.I.P.
And his medals were:1939-45 Star; France Germany Star; Defence Medal; War Medal; CVSM & Clasp.

His name is at the monument in Rots Normandy but was wrong written as O’Connoll. 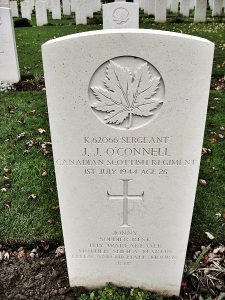