George was born on April 4 1918 in Calgary as the son of William Keith and Isobelle Lorimer (both Scottish). His parents were married on March 6 1916 in Calgary. He was married on August 23 1940 with Alberta Agnes Lorimer nee Gardner, of Youbou, British Columbia. And their son was Bruce Aitken Lorimer. His brothers were Malcolm Keith, John Duncan and James Gibson Lorimer (all three overseas in the army). And his sister was Margaret Lorimer and his aunt Ms. Margaret Lorimer.
He was a student and member of the Presbyterian Church.
He enlisted on September 20 1939 in Victoria British Columbia and he went on September 2 1941 overseas to the UK and he went thereafter on June 6 1944 to France for the D-Day landing.
George died of wounds on Tuesday August 15 age 26 in the A Coy near Falaise and he was temporarily buried in Mondeville and reburied on April 25 1945 in Bretteville S/Laize.
At his headstone: EVER REMEMBERED BY MOTHER AND DAD, SISTERS AND BROTHER
His medals were: 1939-45 Star; France Germany Star; Defence Medal; War Medal; CVSM & Clasp. 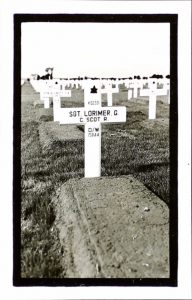