David was born on October 18 1920 in Stout British Columbia as the son of George and Pearl Janicki (both Ukrainians) , of Vernon, British Columbia. They were married on July 28 1916 in Yorkton Saskatchewan. His brothers were Nick, Frederick Alex and Tony Walter Janicki and his sister was Verna Irene Janicki and Mary Janicki died as a baby in 1918.
He was a waiter and he was member of the Church of England. He enjoyed baseball and softball and read very little.
He enlisted on May 30 1942 in Otter Point Camp British Columbia and he went overseas to the UK on May 23 1943 and he went thereafter on June 6 1944 to France for the D-Day landing.
David was killed in action on Friday February 9 1945 age 24 in the B Coy at the Waal flats during the battle of the Rhineland and he was temporarily buried in Nijmegen and on August 2 1945 reburied in Groesbeek.
At his headstone: HALLOWED BE THE NAME OF HIM WHO RESTS IN ETERNAL PEACE IN THIS DISTANT LAND
His medals were: 1939-45 Star; France Germany Star; Defence Medal; War Medal; CVSM & Clasp. 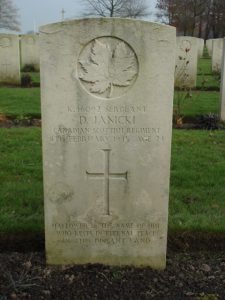