Arnt was born on July 6 1919 in Sorfalla Norway as the son of Mr. Olsen ( deceased in Norway in 1920) and Hilda Moan (remarried) of Sedgewick Alberta. His parents were married on June 13 1912 in Norway. His brother was Odd Olsen and his sisters were Mrs. Lilly Pedersen nee Olsen, Mrs. Ruth Bayer-nee Olsen and Ida Olsen. And his half-sisters were Mrs. Jorna Jacobsen nee Moan and Anna Moan.
He was a fisherman and member of the Lutheran Church. He spoke Norwegian and English and was interested in baseball, softball, skating, swimming and reading fiction.
He enlisted on May 15 1942 in Calgary and he went overseas to the UK on September 21 1943 and he went thereafter on June 13 1944 as reinforcement to France. He was on July 4 attached to the 1st Canadian Parachute Battalion.
Arnt was killed in action on Thursday August 17 age 25 as part of these para’s and he was temporarily buried in Troarn and reburied on April 1 1946 in Hottot les Bagues.
His medals were: 1939-45 Star; France Germany Star; Defence Medal; War Medal; CVSM & Clasp.
He also served with the Canadian Scottish Regiment. 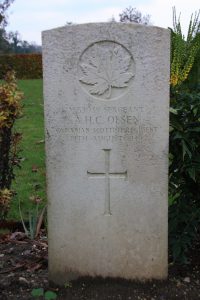