Alexander was born on May 8 1916 in Glenboro Manitoba as the son of John and Annie McKenzie Clark, of Oakner, Manitoba. They were married on August 5 1912 in Brandon Manitoba and his mother deceased on January 21 1944.
He had two brothers J.M. Clark and D.A. Clark in the army too and his sisters were: Isabel Clark, Mrs. J. R. Knockham, Christina and Joyce Clark.
He was a truck driver and member of the United Church.
Alexander enlisted on June 29 1940 in Duncan British Columbia and he went on August 24 1941 overseas to the UK. He was wounded by an enemy air raid on April 27 1942 in York England.
And he went thereafter on June 6 1944 to France for the D-Day landing. He became on September 10 1944 a sergeant.
Alexander was killed in action on Friday October 27 1944 age 28 in the A Coy at the Breskens Pocket and the Scheldt in Holland and he was temporarily buried in Knokke, Belgium by the Germans and after that reburied on June 26 1945 in Adegem.
At his headstone: He gave his life That others Might live in peace, What more has man to give?
His medals were: 1939-45 Star; France Germany Star; Defence Medal; War Medal; CVSM & Clasp. 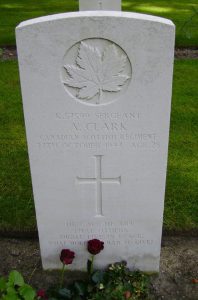