Roy was born on April 7 1923 in Duncan British Columbia as the son of George (English) and Sarah Parlee (Scottish) of Victoria British Columbia. His parents were already divorced and his mother remarried as Mrs. Sarah Green. His brothers were George (RCAF) and Frederick C. Parlee (RCAF) and his sisters were Irene and Eva Parlee. And his half-brother was W.J Green and his half-sisters were Dorothea and Shirley V. Green.
He was an electrician’s helper and member of the Church of England. In his spare time he liked shows, snooker, listen to the radio and reading.
He enlisted on February 3 1943 in Victoria and he went on September 1 overseas to the UK and he went thereafter on June 6 1944 to France for the D-Day landing.
Roy was killed in action on Tuesday August 15 age 21 in the B Coy near Falaise and he was temporarily buried 2 km’s East of Soulangy and reburied on.. May 17 1945 in Bretteville S/Laize.
His medals were: 1939-45 Star; France Germany Star; Defence Medal; War Medal; CVSM & Clasp. 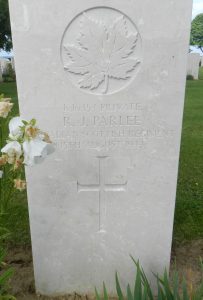