Zdisl (Jack) was born on October 2, 1921 Mienwinku, Poland as the son of Nickolas (Nick) and Ludwika (deceased) Rudski (both Polish), of Round Valley, Alberta. They were married on July 10 1910 in Wismice Poland. His brothers were Joseph and Adolph Rudski and his sisters were Mary Sekida nee Rudski and Stephania and Janine Rudski. And the already deceased siblings were Marianne and Mieczyslaus Rudski.
He was a lumberman and member of the Roman Catholic Church. He spoke Polish and English and his hobby was woodwork
He enlisted on November 1 1941 in Edmonton and he went on May 12 1942 overseas to the UK and he went thereafter on November 4 1944 to NW Europe.
Zdisl was killed in action on Wednesday March 28 1945 age 23 in the C Coy near Emmerich Germany during the battle of the Rhineland. And he was temporarily buried in Vrasselt Germany and he was then on February 13 1946 reburied in Groesbeek.
His medals were: 1939-45 Star; France Germany Star; Defence Medal; War Medal; CVSM & Clasp. 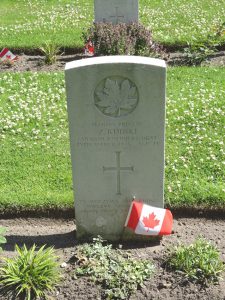