Willis was born on January 14, 1906 Port Hope, Ontario as the son of Mr. Wintle (English and deceased) and Mrs. Effie Cole (remarried and she used to live in Batavia New York USA). His parents were married on August 15 1903 in Port Hope. He lived after his birth from 1910 till 1941 in Batavia New York and he was married on November 23 1929 here with Mary Elizabeth Wintle of Batavia. They had one daughter Audrey Lois Wintle. He had still the American citizenship.
He was a shoe maker and member of the United Church of Canada.
He has been for sixteen months in the Medical Corps of the American Army.
And he enlisted on September 3 1941 in the Canadian Army in Toronto and he went overseas to the UK on April 19 1942 and he went thereafter on June 6 1944 as reinforcement to France during the D-Day landing.
Willis was killed in action on Saturday July 15 age 38 in the C Coy near Caen and he was temporarily buried in Beny S/Mer and he was reburied on April 23 1945 there.
And his medals were: 1939-45 Star; France Germany Star; Defence Medal; War Medal; CVSM & Clasp. 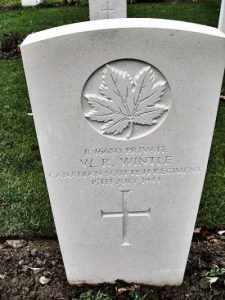