William was born on December 23 1914 in Langley Park Durham, England as the son of Mr. T. (name unknown and deceased in 1916) and Margaret Bousfield, of Oliver, British Columbia. His parents were married on June 29 1907 in Durham, England. His stepfather was Wilfred Bousfield.
His brother was Thomas Wilfred Bousfield who also was a soldier of his regiment and his half-brothers were John and Frank Bousfield. His sister was Elsie Lindsay and half-sisters were Annie Neid, Gladys Caughlin and Margaret Bousfield.
His profession was a logger and he was member of the Church of England.
He enlisted on March 30 1942 in Vernon British Columbia and he went overseas to the UK on September 1 1943 and he went thereafter to France on June 6 1944 for the D-Day landing.
William was killed in action on Saturday July 8 age 29 in the B Coy near Cussy and he was temporarily buried in Beny S/Mer and was reburied on April 16 1945 there.
At his headstone: WHO COULD DIE A BETTER DEATH FOR HE GAVE HIS LIFE FOR ONE AND ALL. MOTHER
And his medals were:1939-45 Star; France Germany Star; Defence Medal; War Medal; CVSM & Clasp. 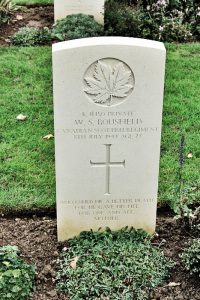