William was born on February 28 1921 in Leslie Saskatchewan as the son of William George and Mary Holness (both English). His parents were married on April 23 1918 in Winnipeg. He was married on October 1 1940 with Doris Margaret Holness of Victoria British Columbia. His brothers were David E. and Kenneth C. Holness and his sisters were Olive, Marjory and Edna Holness.
He was a sign painter and member of the Church of England.
He enlisted on July 2 1940 in Vancouver and he went on September 2 1941 overseas to the UK. And he went thereafter on June 6 1944 to France for the D-day landing.
William died of wounds on Saturday July 8 age 23 in the B Coy near Cussy and he was temporarily buried in Beny S/Mer and reburied on April 16 1945 there.
His medals were: 1939-45 Star; France Germany Star; Defence Medal; War Medal; CVSM & Clasp. 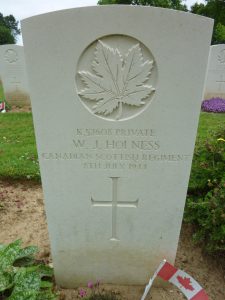