William was born on October 28 1912 in Whitehaven Cumberland England as the son of John and Francis Gill. His parents were married on December 25 1909 in Whitehaven. He was married on June 26 1944 in Vancouver with Viola Pearl Gill-Colby, of Kila, Montana, U.S.A. His sister was Mrs. Margaret White.
He was a miner and member of the Church of England.
He enlisted on July 24 1942 in Vancouver and he went on August 8 1944 overseas to the UK and he went thereafter on October 15 to France.
Lloyd was killed in action on Friday October 27 1944 age 31, one day before his 32 birthday in the A Coy near the Breskens Pocket and the Scheldt and he was temporarily buried in Maldegem and on July 24 1945 reburied in Adegem.
At his headstone: A BELOVED HUSBAND AND SON. DEATH HAS MOULDED INTO CALM COMPLETENESS THE STATUE OF HIS LIFE R.I.P.
His medals were: Medal 1939-45, France Germany Medal, War medal; CVSM & Clasp. 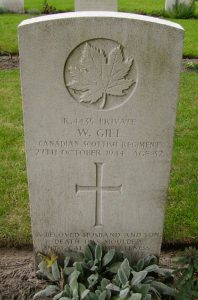