William was born on March 10 1924 in Vancouver as the son of William and May Westbrook (both English), of Hardy Island, British Columbia. They were married on November 9 1916 in Reigate Surrey England. His sister Daphne May Harding nee Westbrook was his next of kin and she was officially appointed so in his last will. His other sister was Hazel Joan Ross and his other brother Arthur James Westbrook already deceased in 1933.
He was a logger and member of the United Church.
He enlisted on February 29 1944 in Vancouver and he went on October 20 overseas to the UK and he went thereafter on November 18 to NW Europe.
William was killed in action on Monday February 19 1945 age 20 in the A Coy at the Moyland Wood during the battle of the Rhineland. And he was temporarily buried in Bedburg Hau Germany and he was then on September 19 1945 reburied in Groesbeek.
At his headstone: EVER IN OUR HEARTS. MUM AND DAD
His medals were: 1939-45 Star; France Germany Star; War Medal; CVSM & Clasp. 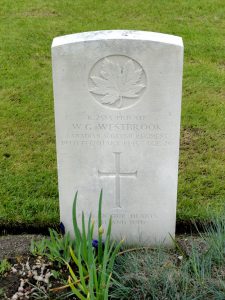