William was born on September 7 1918 in Bruce Mines Ontario as the son of William Mansfield and Ida Lewis (deceased), of Detroit, Michigan U.S.A. His parents were divorced. His brothers were: Gerald Fred in the Canadian Army too and Grant Lewis (deceased) and sister Katherine Lewis (deceased). His grandmother where he lived was Kate Lewis. His friend was Stanley Dunseath. He acknowledged official his daughter Ida Gail Roberts born on October 1 1939 in a letter from the Department of Welfare Children’s Aid Branch in Toronto. And the name of the mother was Blanche Ida Roberts.
His profession was a carpenter and he was a member of the United Church.

He enlisted on July 30 1940 in Sault Ste Marie Ontario and he went overseas tot the UK on September 2 1941.
William was killed in action on Tuesday June 6 1944 age 25 during the landing in the C Coy in the first wave at the beaches of Normandy. He was temporarily buried in St Croix Graye s/Mer and reburied on February 16 1945 in Beny.
At his headstone: NOT JUST TODAY BUT EVERY DAY IN SILENCE WE REMEMBER
His Medals were: 1939-45 Star; France Germany Star; Defence Medal; War Medal; CVSM & Clasp. 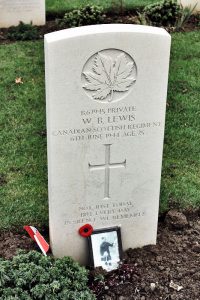