Willford was born on April 10 1912 in Botha Alberta as the son of Charles Westly (Irish) and Nellie Irene McLaughlin (English). He was the husband of Helen Margaret McLaughlin, of Ranch, Alberta. He was married on August 11 1942 in Athabasca Alberta. His brothers was George Abner Mc Laughlin (in the army in France too) and his sisters: Eleanore Ruth Wise and Mary Eva Blake.
His profession was a farmer and he was member of the Church of England.
He enlisted on January 7 1943 in Grande Prairie Alberta and he went overseas to the UK on April 4 1943 and he went thereafter on Tuesday June 6 1944 in the A Coy to France on D-Day.
Willford died of wounds on the same day age 32 and he was temporarily buried in Graye S/Mer and on December 12 1944 reburied in Beny S/Mer.
At his headstone: THO’ ON EARTH YOU ARE NO MORE IN MEMORY YOU ARE WITH US. WIFE, DAD, MOTHER, SISTERS AND BROTHER
His medals were: 1939-45 Star; France Germany Star; Defence Medal; War Medal; CVSM & Clasp. 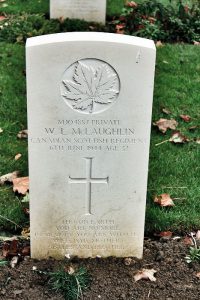