Wilfred was born on December 8 1919 in Edmonton as the son of William Herbert and Mary Alice Petherbridge, of Edmonton. His parents were married on December 6 1910 in London England. His brothers were William, Frank, Stanley, John and James Petherbridge.
His function was a hospital orderly and he was member of the Church of England.
He enlisted on October 1 1940 in Edmonton and he went overseas to the UK on June 18 1943 and he went thereafter to France on June 6 1944 for the D-day landing.
Wilfred was killed in action on Saturday July 8 age 24 in the B Coy near Cussy and he was temporarily buried in Beny S/Mer and he was also reburied on April 16 1945 there.
At his headstone: THOUGH YOU ARE LOST TO SIGHT IN MEMORY YOU ARE EVER DEAR
And his medals were:1939-45 Star; France Germany Star; Defence Medal; War Medal; CVSM & Clasp. 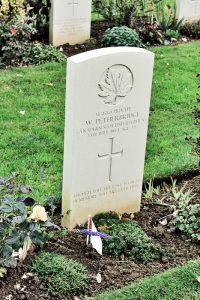