Wilfred was born on June 22, 1923 in Tilley, Alberta as the son of Frank (Irish and deceased) and Grace David (Scottish) of Calgary. His mother was remarried as Mrs. La Rocke. His brothers were Wilbert W., Willard Arthur, George L., Wilson and William David. His half-brother was Stanley La Rocke. His sisters were Mrs. Ireen Kerby, Mrs. Katherine Neelson and Mrs. Betty Choker.
His profession was a labourer and he was member of the United Church
He enlisted on February 18, 1943 in Calgary and he went overseas to the UK on September 1 1943 and he went thereafter on Tuesday June 6 1944 to France for the landing on D-Day.
Wilfred died of wounds on Friday June 9 age 21 and he was temporarily buried in Graye S/Mer and he was reburied on December 13 1944 in Beny S/Mer. Note at the CWGC list is he is killed in action on June 6.
At his headstone: EVER REMEMBERED BY MOTHER, BROTHERS AND SISTERS
And his medals were:1939-45 Star; France Germany Star; Defence Medal; War Medal; CVSM & Clasp. 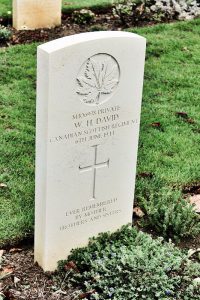