Wesley was born on May 29 1916 in Campbellford Ontario as the son of Robert and Mabel McArthur of Toronto. His parents were married on March 10 1915 here. He was married on June 4 1938 in Toronto with Eleanor Grace McArthur of Toronto. She remarried after the war as Mrs. Downing.
He was a barber and member of the United Church. He liked to play rugby, softball, hockey and basketball on the high school. And played lacrosse in a city Bantam League and did a little boxing with friends. In his spare time he was tinkering with the radio and his car and did woodwork.
He enlisted first the RCAF and after doing a test for pilot he failed and he was discharged on November 13 1943 and choose thereafter for the army.
He enlisted therefore on December 9 1943 in Toronto and he went overseas to the UK on July 4 1944 and he went thereafter on September 7 as reinforcement to France.
Wesley was killed in action on Friday September 22 age 28 in the C Coy near Calais and he was temporarily buried in Hardinghen and on July 31 1945 reburied in Calais Leurbringhen.
At his headstone: NONE KNEW HIM BUT TO LOVE HIM; NONE NAMED HIM BUT IN PRAISE
His medals were: 1939-45 Star; France Germany Star; War Medal; CVSM & Clasp. 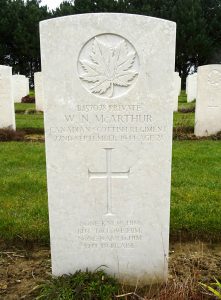