Walter was born on June 17 1921 in Australian British Columbia as the son of Walter and Mary Wilson nee Beveridge Hogg, of Australian. His parents were married on July 9 1920 in Quesnel British Columbia. His sister was Sarah Jean Hogg.
He was a farmer and member of the United Church.
He enlisted on February 17 1941 in Prince George British Columbia and he went thereafter on September 2 1941 overseas to the UK.
Walter died on Tuesday August 31 1943 age 22 due to an accidental gunshot in the neck and he was then buried at the Brookwood Military Cemetery.
At his headstone: THAT HE MAY EVER DWELL WITH THEE GRANT US, HOLY JESU
His medals were: Defence Medal; War Medal; CVSM & Clasp. 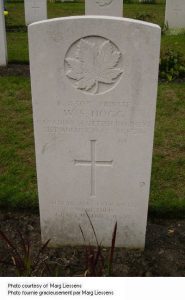