Walter was born on January 24 1923 in Dana Saskatchewan as the son of Martin Ralph and Albina Smolkowski, of Spokane, Washington, U.S.A and both American. His parents were married on September 27 1915 in Prudhomme Saskatchewan. His brothers were Carl Edmund, Francis Ralph (American Army), Stanley Robert (American Army) and sister Rosalyn June Smolkowski.
He was a mechanic and member of the Roman Catholic Church. He liked sports as baseball, hunting and fishing and his hobbies were model aircraft, reading adventure and aircraft stories and attending movies.
He enlisted on October 26 1942 in Seattle USA and he went overseas to the UK on June 24 1943 and he went thereafter on June 6 1944 to France for the D-Day landing.
Walter was killed in action on Tuesday August 15 age 21 in the A Coy near Falaise and he was temporarily buried 2 km’s East of Soulangy and reburied on May 17 1945 in Bretteville S/Laize.
At his headstone: MAY HIS SOUL, THROUGH THE MERCY OF GOD, REST IN PEACE.
His medals were: 1939-45 Star; France Germany Star; Defence Medal; War Medal; CVSM & Clasp. 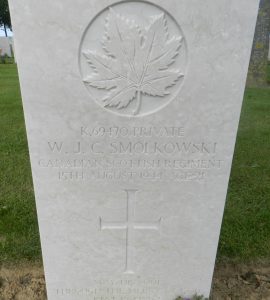