Thomas was born on April 1 1918 in Whitemud Sakatchewan as the son of Alexander Scott Duncan and Agnes Dunlop Duncan (deceased). He was the husband of Anna Duncan, of Oliver, British Columbia. They were married on December 20 1943 in Oliver and Anna remarried with Mr. Othman after the war. His brother was Arthur Scott Duncan and his sisters were Agnes Lorie Davidson and Euphemie Menton.
His profession was a truck driver and he was a member of the United Church. His hobbies were swimming and softball.
He enlisted on August 16 1942 in Vancouver and he went overseas to the UK on February 24 1944 and thereafter to France for the D-Day landing on June 6.
Harley died of wounds on Thursday June 8 1944 age 26 in the D Coy near Putot en Bessin and he was temporarily buried there and on January 18 1945 reburied in Bretteville S/Laize.
At his headstone: IN OUR MEMORY YOU WILL EVER REMAIN DEAR. WIFE ANNA AND BABY SHARON ROSE
His medals were: 1939-45 Star; France Germany Star; War Medal; CVSM & Clasp. 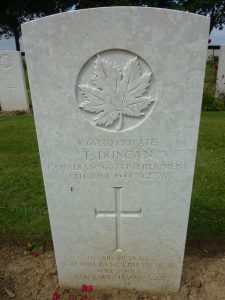