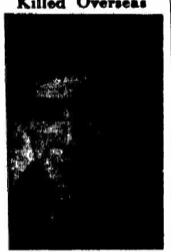 Stephen was born on March 26 1922 in Hardieville Alberta as the son of Peter and Helen Bolokoski, of Lethbridge, Alberta. His parents were married on November 21 1914. His brother was John Bolokoski and his sister M. Vernice Bolokoski. And another brother Willie (died in 1919) and sister Gladys (died in 1921) died very young before.
His profession was a shipper and he was member of Roman Catholic Church. His hobbies were playing a violin, reading mystery stories and magazines and sports like baseball, hockey and fishing.
He enlisted on August 18 1942 in Calgary and he went overseas to the UK on May 7 1944 and he went thereafter on June 11 to France as reinforcement.
Stephen was killed in action on Saturday July 8 age 22 in the Coy near Cussy and he was temporarily buried there too and reburied on February 8 1945 in Beny S/Mer.
At his headstone: WE WHO KNEW HIM HERE CAN SAY A SIMPLE LOVE, A SIMPLE TRUST A SIMPLE DUTY DONE 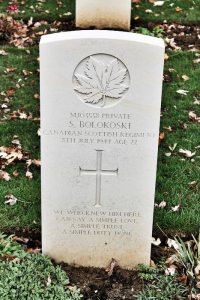