Soleman was born on March 6 1910 in Jasmin Saskatchewan as the son of Mr. Modest (deceased in 1943) and Mrs. Modest Kline (deceased in 1914) and both French. He was the husband of Elizabeth Kline, of Ituna, Saskatchewan. Their 5 children were Alice, Annie Evelyn, Robert, Henry William and Elmer Kline. His adopted brother Joseph Amyotte became his next of kin.
His profession was a labourer and he was member of the Roman Catholic Church. He spoke English and French.
He enlisted on October 8 1941 in Portage la Prairie Manitoba and he went overseas to the UK on June 18 1943 and he went thereafter to France on June 6 1944 in the first assault wave during the D-day landing.
Albert was killed in action on Saturday July 8 age 34 in the C Coy near Cussy and he was temporarily buried there and he was reburied on February 6 1945 in Beny S/Mer.
At his headstone: HE DIED TO SAVE US ALL IN OUR HEARTS HE’LL ALWAYS BE. NEVER FORGOTTEN BY HIS WIFE AND FIVE CHILDREN
And his medals were:1939-45 Star; France Germany Star; Defence Medal; War Medal; CVSM & Clasp. 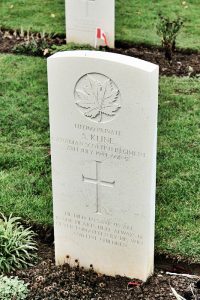