Sigurd was born on March 29, 1923 in Daysland, Alberta as the son of Emil Marensius (deceased) and of Bergliot Constance Huser, of Fork Lake, Alberta. His parents were married on October 9 1913 in Hemmen Norway. His mother remarried with Johan Alf Olsen and he was his stepfather. His brothers were Harry O, and Einar B. Huser (also in the army) and his sisters were Mrs. Francis Evans, Esther H. Huser and Mrs. Ray Kumpula.
He was a farmer and member of the Lutheran Church. He spoke English and Norwegian.
He enlisted on February 17, 1943 in Edmonton and he went on September 1 1943 overseas to the UK and he went thereafter to France for the D-Day landing.
Sigurd died of wounds on this Tuesday June 6 1944 age 21 in the B Coy and he was temporarily buried in Graye S/Mer and reburied on December 12 1945 in Beny S/Mer.
At his headstone: REST IN PEACE, DEAR SON AND BROTHER, TILL WE MEET AGAIN
His medals were: 1939-45 Star; France Germany Star; Defence Medal; War Medal; CVSM & Clasp. 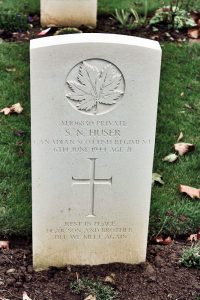