Sherwin was born on September 18 1924 in Petersburg North Dakota USA as the son of Selmer and Alma Dokken, both Americans, of Rolla, British Columbia. His parents were married on October 12 1921 in Fordville USA. His brothers were Garston, Alvin and Thomas Dokken and his sisters: Harriett Torkelson and Jean Dokken.
He emigrated to Canada in 1928 and his father was naturalized in 1936.
His profession was a farmer and he was a member of the Lutheran Church. His hobbies were: playing some softball at school, hunting, swimming, skiing and reading.
He enlisted on October 14 1943 in Calgary and he went overseas to the UK on May 7 1944 and he went thereafter as reinforcement on June 13 1944 to France.
Sherwin was attached on July 4 1944 to the 1st para battalion and he was after that killed in action on Thursday August 17 1944 age 19 and he was temporarily buried in Troarn and on April 1 1946 reburied in Hottot les Bagues.
At his headstone: ASLEEP IN JESUS BLESSED SLEEP FROM WHICH NONE EVER WAKES TO WEEP
His medals were: 1939-45 Star; France Germany Star; War Medal; CVSM & Clasp.
He served later first with the Canadian Scottish Regiment. 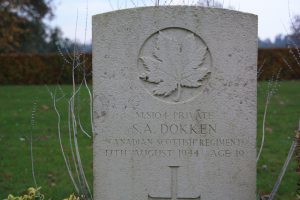