Sam was born on April 25 1924 in Inglis Manitoba as the son of Mr. (Russian) and Margaret (Ukrainian) Flundra. He was married with Catherine Rose Flundra nee Benin, of Kitchener, Ontario. She remarried after the war as Mrs. Kozak.
He was a labourer and member of the Greek Catholic Church. He spoke English and Ukrainian.
He enlisted on February 8 1944 in Brantford Ontario and he went on June 24 overseas to the UK and he went thereafter on July 23 to France. And he was wounded in action on July 30 and then evacuated to an English hospital and he disembarked again on October 13 to NW Europe. He was then wounded in action again on October 31.
Sam died of wounds on Wednesday November 28 1944 age 20 in the B Coy near Groesbeek and he was temporarily buried in Nijmegen and he was then on August 8 1945 reburied in Groesbeek.
At his headstone: SADLY MISSED BY HIS LOVING WIFE CATHERINE, LEFT ALONE
His medals were: 1939-45 Star; France Germany Star; War Medal; CVSM & Clasp. 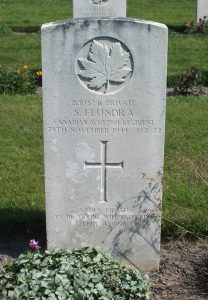