Ronald was born on December 30 1922 in Vancouver as the son of James Edward (deceased in 1922) and Verna Florence Cameron who later remarried Robert Hume, of Vancouver. His own parents were married on September 15 1919 in Winnipeg. He was the grandson of his foster mother Florence Oakley who was a widow, of Vancouver. His brother was James Edward Cameron.
His profession was a truck driver and he was member of the Church of England.
He enlisted on November 17 1942 in Vancouver and he went overseas to the UK on May 22 1943.
Ronald was killed in action on Tuesday June 6 1944 age 21 in the C Coy during the landing in the first assault on the beaches of Normandy and he was temporarily buried at the  Lantheville churchyard and on July 28 1945 reburied in Bretteville S/Laize.
At his headstone: FATHER IN THY GRACIOUS KEEPING LEAVE WE NOW OUR LOVED ONE SLEEPING
His medals were: 1939-45 Star; France Germany Star; Defence Medal; War Medal; CVSM & Clasp. 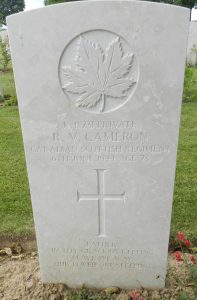