Robert was born on July 1 1905 in Larkhall, Scotland as the son of David en Sarah Bullock.

He was a farmer and member of the Presbyterian Church.

He enlisted on April 19 1943 in Calgary and he went overseas to the UK on March 4 1943 and he went thereafter on June 17 1944 to NW Europe. He was transferred on December 18 to the Canadian Scottish near Nijmegen and came into the ‘C’ Coy, with which he took part of the operations in the Rhineland, at Emmerich and Deventer and  Zwolle.

Robert was killed in action on Monday April 23 1945, age 39 during the liberation of Wagenborgen, just ten weeks before his 40th birthday.

He was temporarily buried in Siddeburen and reburied on February 15 1946 in Holten. 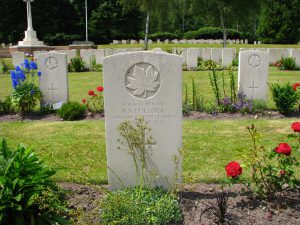