Robert was born on March 1 1925 in Trail British Columbia as the son of Fred (English) and Eva Matthew (divorced and Irish), of Eburne, British Columbia. His parents were married on May 17 1910 in Moose Jaw Saskatchewan. His brother was James Bowcock (in the army overseas too) and his sisters were Mrs. Eva Brown and Mrs. Amy Catton.
He was a student and he was member of the Church of England. He liked sports, hunting, shows, dancing and reading.
He enlisted on January 8 1943 in Vancouver and he went overseas to the UK on April 12 1944 and he went thereafter to France on June 11 as reinforcement.
Robert was killed in action on Saturday July 8 age 19 in the B Coy near Cussy and he was temporarily buried there and he was reburied on February 8 1945 in Beny S/Mer.
At his headstone: LOVED AND REMEMBERED ALWAYS
And his medals were: 1939-45 Star; France Germany Star; War Medal; CVSM & Clasp. 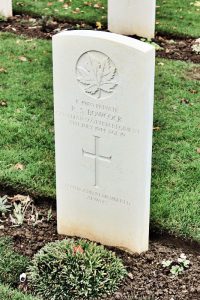