Robert was born on April 28 1925 in Lethbridge Alberta as the son of John Edward and Jennie Kathleen Ludlow (both English), of Nelson, British Columbia. His parents were married on September 20 1921 in Nelson. His brothers were John Edward, William Montgomery, Richard Vernon and Laurence Alvin Ludlow.
He was an express porter and member of the United Church.
He enlisted on October 28 1943 in Vancouver and he went on July 4 1944 overseas to the UK and he went thereafter on December 29 to NW Europe.
Robert was killed in action on Tuesday February 20 1945 age 19 in the B Coy at the Moyland Wood during the battle of the Rhineland. And he was temporarily buried in Bedburg Hau Germany and he was then on September 19 1945 reburied in Groesbeek.
At his headstone: IN PROUD REMEMBRANCE
His medals were: 1939-45 Star; France Germany Star; Defence Medal; War Medal; CVSM & Clasp. 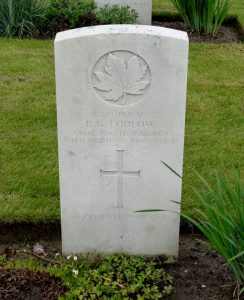