Robert was born on June 29 1923 in Prince George British Columbia as the son of Ernest Hanford Burden and Vera Lucille Burden (American), of Prince George. His parents were married in Edmonton. His brothers were Ronald Ernest and William George Burden and his sister was Ruthe Anne Burden. His uncle was Frederick Burden.
He was a logger and member of the Church of England.
He enlisted on June 25 1940 in Prince George and he went on March 30 1942 overseas to the UK and he went thereafter to France on June 6 1944 for the D-Day landing. Note He gave first his date of birth as on February 6 1921 but they discovered this because he was then just 17 years old and so he had to do an extra training somewhere.
Robert was killed in action on Tuesday August 15 age 21 in the D Coy near Falaise and he was temporarily buried 2 km’s East of Soulangy and reburied on May 17 1945 in Bretteville S/Laize.
At his headstone: REST IN PEACE
His medals were: 1939-45 Star; France Germany Star; Defence Medal; War Medal; CVSM & Clasp. 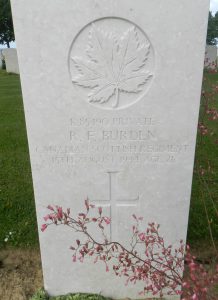