Robert was born on November 17 1910 in Chilliwack British Columbia as the son of Albert Hugh and Olive Alfreda McCauley (deceased at the age of 75 on October 29 1944), of Coughlan, British Columbia. His parents were married in 1899 in Swan River Valley Manitoba. His brothers were William John, George and Hugh K. McCauley.
He was a power saw operator and member of the United Church.
He enlisted on August 17 1942 in Vancouver and he went on March 18 1943 overseas to the UK and he went thereafter on July 11 1944 to France.
Robert was killed in action on Sunday October 15 age 23 in the A Coy near the Leopold Canal in Belgium and he was temporarily buried in Maldegem and on July 17 1945 reburied in Adegem.
At his headstone: GREATER LOVE HATH NO MAN THAN THIS, THAT A MAN LAY DOWN HIS LIFE FOR HIS FRIENDS
His medals were: Medal 1939-45; France Germany Medal, Defence Medal; War medal; CVSM & Clasp. 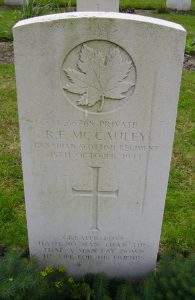