Richard was born on June 1 1904 in Aberdeen Scotland as the son of John and Elizabeth Moir. He was married on May 9 1942 with Mary Hutchinson Cordiner Moir, of Boddam, Aberdeenshire, Scotland. They had a daughter Doris Pirie. His brother was John Moir (in the army too) and his sisters were Mrs. John Stevens and Bessie Moir.
He was a baker and member of the Presbyterian Church.
He enlisted on November 30 1939 in Kamloops British Columbia and he went overseas to the UK on December 31 1939 with the Seaforth Highlanders of Canada and he went thereafter on August 27 1943 with them to North Africa. He disembarked the UK again on February 8 1944 and he went thereafter on June 6 to France with the Canadian Scottish Regiment in the first assault wave during the D-day landing.
Richard was killed in action on Saturday July 8 age 40 in the C Coy near Cussy and he was temporarily buried there and he was reburied on February 7 1945 in Beny S/Mer.
At his headstone: MEMORIES KEEP US EVER NEAR ONE WE LOVED AND STILL HOLD DEAR. WIFE MARY
And his medals were: 1939-45 Star; Italy Star; France Germany Star; War Medal; CVSM & Clasp. 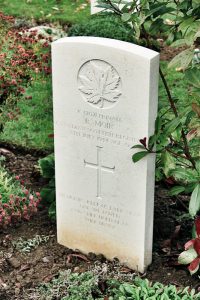