Richard was born on September 4 1915 in Parry Sound Ontario as the son of William and Francis Elizabeth (both deceased) Bushey. His parents were married in 1909 in Parry Sound. His sister Elsie Turner- Gostick was his next of kin and his other sister was Francis Elizabeth Dean and his brother William Bushey.
He was a farmer and member of the Salvation Army.
He enlisted on June 17 1940 in Calgary and he went thereafter on September 12 1941 overseas to the UK.
Richard died on Saturday March 14 1942 age 26 due to an accident with a truck where he was sitting in and which strikes a hedge and a tree in England. And he was then buried at the Brookwood Military Cemetery.
At his headstone: BLESSED ARE THE PURE IN HEART: FOR THEY SHALL SEE GOD
His medals were: Defence Medal; War Medal; CVSM & Clasp.
He served with the D Coy of the Canadian Scottish Regiment. 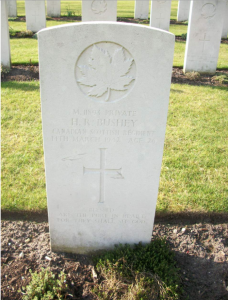