Philip was born on February 22 1921 in Powell River British Columbia as the son of John and Millie Mary Marzoff (both Russian) of Port Alberni British Columbia. He was the husband of Doreen Phoebe Marzoff, of Port Alberni and their children were Phyllis Morris and Burna Marion Marzoff. Doreen remarried after the war as Mrs. Peterson. One brother was also in the army too and his sister was Gladys Marzoff.
He was a fisherman and he was a member of the Church of England.
He enlisted on July 20 1944 in Prince Rupert British Columbia and he went on November 29 overseas to the UK and he went thereafter on March 24 1945 to NW Europe.
Philip was killed in action on Tuesday April 10 age 24 in the B Coy during the battle of Deventer and he was temporarily buried in Oxe near Deventer and was reburied on December 17 1945 in Holten.
At his headstone: DIED FOR HONOUR AND FREEDOM THAT OTHERS MIGHT LIVE. EVER REMEMBERED BY WIFE AND TWO CHILDREN
His Medals were: 1939-45 Star; France Germany Star; War Medal: CVSM &Clasp. 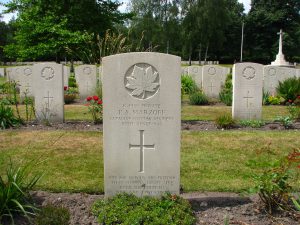