Peter was born on July 12 1925 in Fernie British Columbia, the son of William and Helen Stefak, (both Polish) of British Columbia. They were married on May 5 1924 in Fernie. His mother ( in Fernie) and father (Vancouver) lived later separated. His sister was Ann Stefak.

He was an engine fitter at a shipyard and member of the Roman Catholic Church and he spoke Ukrainian and English.
He enlisted on March 24 1944 in Vancouver and he went on October 12 overseas to the UK and he went thereafter on November 11 to NW Europe.
Peter was missed and was killed in action on Monday February 19 1945 age 19 in the A Coy at the Moyland Wood during the battle of the Rhineland. He was temporarily buried then in Bedburg Hau Germany and he was reburied on September 19 1945  in Groesbeek.
On his headstone: IN LOVING MEMORY OF MY DEAR SON. A DAY OF DUTY DONE, A DAY OF REST BEGUN. R.I.P.
His medals were: 1939-45 Star; France Germany Star; War Medal; CVSM & Clasp. 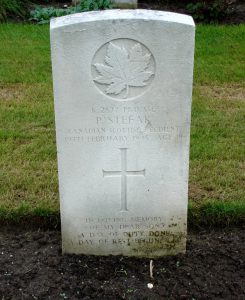