The father Daniel came from the Ukraine to Canada when he was 17 years old. He was settling in Inwood, Manitoba. There he met Maria (Mary)  Holowaty. Their friendship grew and strengthened and they were married in 1910. Pete was born on April 1921, ninth in birth order of what would eventually be a family of eleven children. Sadly the Harasymchuks lost four of their children to the Spanish ‘flu in 1919.

In 1924 the family moved to Saskatchewan. They farmed there for 13 years, before moving to Spallumcheen BC in 1937, where they settled on a farm. Pete had completed grade 7, but did not continue with school in Armstrong.  As in so many families during the depression years, the children were needed to help with work. In Pete’s case their acreage was heavily wooded and there was much hard work to do to clear it. In addition to working on the family farm, also worked driving trucks for the L&A Ranch for a year. Pete and his brothers Mike and Sam, together with their good friend Nick Oberle, had a band called “The Smoky Mountains Boys”, which played for local dances. Mike played the fiddle while the others filled in with guitars. Pete enlisted in the Rocky Mountain Rangers for home defence in1942.

After about a year of various postings on Vancouver Island, he spent seven months at Kiska, Alaska, from July 1943 to January 1944. On his return he was stationed in Terrace,B.C., until October 1944, when he volunteered for service overseas.

Pete travelled to Debert N.S. and arrived in the UK on December 6 1944. He was posted to the Canadian Scottish Regiment a 3rd Division Regiment that had assaulted Juno Breach on D-Day and since then had fought its way across France, Belgium and Holland. Pete joining this  regiment in February 1945, just in time for the bitter fighting in the Hochwald Forest in Germany. The Canadian assignment after the crossing of the Rhine was to swing northward and liberate Holland.

On April 22  1945 the regiment assaulted the  village of Wagenborgen  and it was liberated by April 24.

At some point on Monday April 23 Pete was killed in the fierce urban fighting. He was temporarily buried in Siddeburen and on February 15 1946 reburied in Holten. Pete died on his 24th birthday.

Just after 12 days there was a complete cease-fire and the war was over. 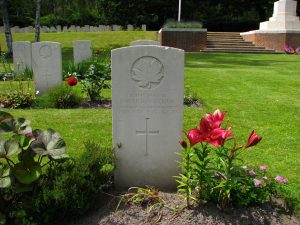