Peter was born on July 16 1922 in Stromsø Norway as the son of Andrew and Magna Rolfstad (both Norwegian), of La Glace Alberta. His brothers were: Elmer and Norman Rolfstad and his sister was Charlotte Rolfstad.
He immigrated to Canada in 1924.
His profession was a farmer and he was member of the Lutheran Church.
His hobbies were motor cycling, reading fiction and he played softball and baseball. He spoke English and Norwegian.
He enlisted on April 11 1943 in Vernon British Columbia and he went overseas to the UK on May 26 1944 and thereafter to France on July 30.
He was taken on strength on August 1 1944 from the Canadian Scottish Regiment to the North Nova Scotia Highlanders.
Peter was killed in action on Saturday August 12 1944 age 22 and he was temporarily buried in Mondeville and on April 23 1945 reburied in Bretteville.
His medals were: 1939-45 Star; France Germany Star; War Medal; CVSM & Clasp. 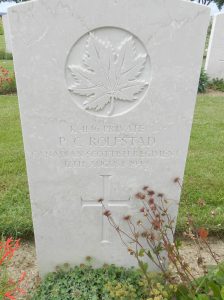