Paul was born on February 28 1918 in Hamilton Ontario as the son of James (deceased) and Emma Stuart. He was married on November 11 1942 in St Johns New Foundland with Ida Mary Stuart, of Kitchener, Ontario and their son was Paul Benedict Stuart. His sisters were Mary Lees, Anne Brown, Ellen and Ruth Stuart.
He was a knitting machine fixer and member of the Roman Catholic Church. He was interested in baseball and rugby and read considerably, good magazines and travel books.
He enlisted on July 18 1940 in the Niagara Camp Ontario and he went on July 22 1943 overseas to the UK and he went thereafter on October 7 1944 to France.
Paul was missed and killed in action on Sunday February 18 1945 age 26 in the C Coy at the Moyland Wood during the battle of the Rhineland. And he was temporarily buried in Bedburg Hau Germany and he was then on September 12 1945 reburied in Groesbeek.
At his headstone: MOST SACRED HEART OF JESUS, HAVE MERCY ON HIS SOUL. R.I.P. WIFE AND SON PAUL
His medals were: 1939-45 Star; France Germany Star; Defence Medal; War Medal; CVSM & Clasp. 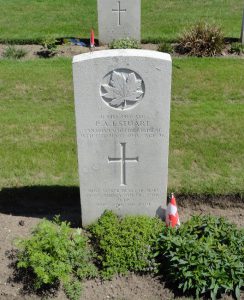