Orville was born on February 3 1917 in La Fleche Saskatchewan as the son of Charles Alexander Babcock and Lillian May Babcock nee Lusk, of Rose Prairie, British Columbia. His parents were married on November 18 1908 in Stoughton Saskatchewan.
His brothers were Raymond, Chester. Elmer and Clifford Babcock. His sisters were Lola L. Hilton, Ida M. Boyd and Pearl E. Babcock.
His profession was a farmer and he was member of the United Church. His interests were hunting and sports like baseball, softball and badminton.
He enlisted on December 20 1943 in Calgary and he went overseas to the UK on May 7 1944 and he went thereafter to France as reinforcement for the D-Day landing on June 6.
Orville was killed in action on Saturday July 8 age 27 in the C Coy near Cussy and he was temporarily buried there too and reburied on February 8 1945 in Beny S/Mer.
At his headstone: LOVE’S AN ESSENCE OF THE SOUL WHICH SINKS NOT WITH THIS CHAIN OF CLAY.
And his medals were: 1939-45 Star; France Germany Star; War Medal; CVSM & Clasp. 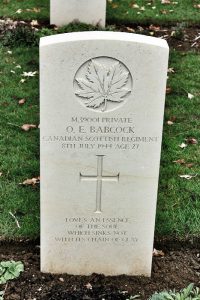