Neil was born on June 30, 1923 Glasgow, Scotland as the son of Donald and Mary MacPherson, of Vancouver. His parents were married on February 17 1922 in Scotland. His bothers were Alexander and Duncan MacPherson and his sisters Emma and Mary MacPherson.
His profession was a shipyard employee and he was member of the Roman Catholic Church.
He enlisted on November 13, 1942 in Vancouver and he went overseas to the UK on June 24 1943 and he went thereafter to France on Tuesday June 6 1944 for the D-day landing.
Neil was killed in action on the same day age 20 in the A Coy. He was temporarily buried in St Croix Graye S/Mer and reburied on February 16 1945 in Beny s/Mer.
At his headstone: OF VANCOUVER, B.C. IN MEMORIAM. JESUS HAVE MERCY, MARY AND JOSEPH PRAY FOR HIM
His medals were: 1939-45 Star; France Germany Star; Defence Medal; War Medal; CVSM & Clasp. 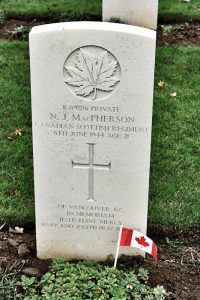