Neil was born on September 20 1919 in Glace Bay Nova Scotia as the son of Mr. and Mrs. Rod MacDonald (both deceased) of Glace Bay. His older brother Roderick Philip MacDonald was his first next of kin but became insane and was not capable anymore and the other brother John took it therefore over then. His other siblings were Michael, Aloysius, Mary and Margaret MacDonald.
He was an apprentice carpenter and member of the Roman Catholic Church.
He enlisted on September 13 1943 in Vancouver and he went on May 7 1944 overseas to the UK and he went thereafter on November 11 to NW Europe.
Neil was missing and killed in action on Monday February 19 1945 age 25 in the A Coy near the Moyland Wood during the battle of the Rhineland. And he was temporarily buried in Bedburg Hau Germany and he was then on September 19 1945 reburied in Groesbeek.
His medals were: 1939-45 Star; France Germany Star; War Medal and CVSM & Clasp. 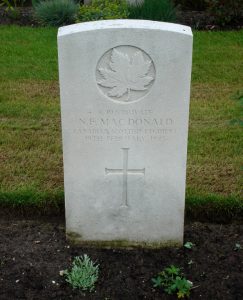