Murray was born on July 15 1919 in East Nissouri Ontario as the son of Mr. McGee  and Mrs. McGee (both deceased). His parents were married on February 11 1913 in Kingtore Ontario.
His brother was David McGee and his half-brothers were: William T. and Lee McGee. His sisters were: Julia McCorquodale and Dorothy J. McGee and half-sisters: Eva and Helen Calder and Millie McAsh.
He was a farm labourer with his father and brother and he was member of the United Church. His hobbies were: to play ball sports, hunting, fishing, reading some time, he played a mouth organ, liked square dancing and went to shows and dances.
He enlisted on August 13 1943 in London Ontario and he went overseas to the UK on February 16 1944 and thereafter to France on July 6.
Murray died of wounds in the A Coy on Saturday July 8 1944 age 24 near Cussy and he was reburied on July 16 1944 in Hermanville.
He is commemorated on a bronze plaque on the Cenotaph located in St. Marys, Ontario.
His medals were: 1939-45 Star; France Germany Star; War Medal; CVSM & Clasp. 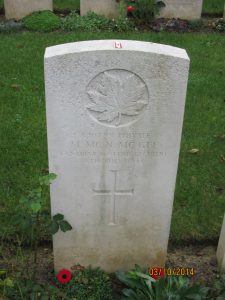