Morris was born on August 14, 1921 In Radville, Saskatchewan as the son of Frederick George and Clara Jane Herbert (both English), of Victoria, British Columbia. His parents were married on November 28 1918 in Regina Saskatchewan. He was the brother of Harvey Andrew, Constance Maude, , Alice Victoria, Joyce Elizabeth, Beryl Eleanor and Lois Georgina Herbert.
His mother Mrs. Clara Herbert was a member of the Remembrance Association, Silver Cross Women of Canada, Golden West Chapter, Kamloops, British Columbia.
He was a student and member of the Church of England.
He enlisted on April 5 1940 in Prince Rupert British Columbia and he went overseas to the UK on September 2 1943 and he went thereafter as reinforcement on June 9 to France.
Morris was killed in action on Tuesday August 15, one day after his 23 rd birthday in the D Coy near Falaise and he was temporarily buried 2 km’s East of Soulangy and reburied on May 17 1945 in Bretteville S/Laize.
At his headstone: ASLEEP IN ETERNAL PEACE, THE REWARD OF THE VALIANT
His medals were: 1939-45 Star; France Germany Star; Defence Medal; War Medal; CVSM & Clasp. 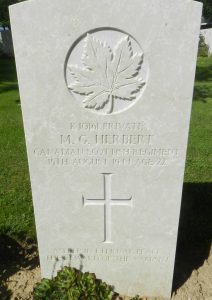