Michael was born on July 12 1911 in Haileybury Ontario as the son of Mr. (deceased) and Mary Jane McMahon. His brothers were Clayton F. and James E.F. McMahon.
He was a miner and member of the Roman Catholic Church.
He enlisted on June 9 1942 in Ottawa and he went on July 4 1944 overseas to the UK and he went thereafter as reinforcement on September 7 to France. He returned for a cyst operation on October 10 to the UK  and he went on November 25 back to NW Europe.
Michael was killed in action on Sunday February 18 1945 age 33 in the C Coy at the Moyland Wood during the battle of the Rhineland. And he was temporarily buried in Bedburg Hau Germany and he was then on September 12 1945 reburied in Groesbeek.
His medals were: 1939-45 Star; France Germany Star; War Medal; CVSM & Clasp. 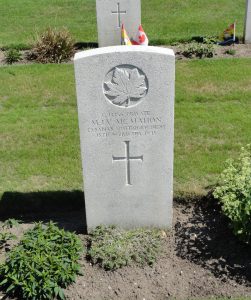