Michael was born on November 20 1923 in Fort William Ontario as the son of Joseph (deceased in 1925) and Mary Hawryluk (both Ukrainians), of Finmark, Ontario. His parents were married on May 8 1917 in Fort William. His mother remarried with Fred Lozinski and he was his stepfather. His brothers were Joseph and Peter Hawryluk and his sister was Sophie Hawryluk.
He was an aircraft fitter and he was member of the Roman Catholic Church. He spoke English and Ukrainian.
He enlisted on October 10 1942 in Port Arthur Ontario and he went overseas to the UK on May 22 1943 and he went thereafter on June 6 1944 to France for the D-Day landing.
Michael was killed in action on Saturday July 8 age 20 in the A Coy near Cussy and he was temporarily buried there and he was reburied on February 6 1945 in Beny S/Mer.
At his headstone: IN THE LOVING ARMS OF JESUS RESTS OUR DEAR ONE EVERMORE
And his medals were:1939-45 Star; France Germany Star; Defence Medal; War Medal; CVSM & Clasp. 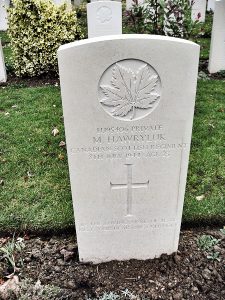