Matthew was born on May 29 1917 in Victoria British Columbia as the son of Basil and Bessie Aylmer (both English) of Kootenay Lake British Columbia. His parents were married on February 28 1916 in Folkestone England.
His profession was a bank clerk and he was member of the Church of England.
He enlisted on July 23 1942 in Vernon British Columbia and he went overseas to the UK on December 21 1943 and he went thereafter as reinforcement to France on June 9 1944.
Matthew died of wounds on Saturday July 1 age 27 in the D Coy due to a mine accident near Rots Hamel and he was temporarily buried in le Hamel and reburied on February 5 1945 in Beny S/Mer.
At his headstone: Son of the Hon. Basil Aylmer and Mrs. Aylmer, of Queen’s Bay, British Columbia.
And his medals were: 1939-45 Star; France Germany Star; War Medal; CVSM & Clasp. 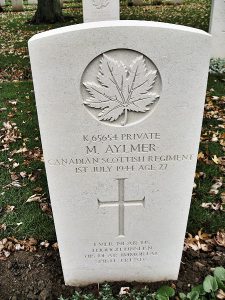