Lionel was born on December 10 1924 in Gerald Saskatchewan as the son of Norris Thompson and Tillie Wheeler (both English), of Victoria British Columbia. His parents we married on March 27 1915. His brothers were Edward and Norris Wheeler and his sisters were Leona Wheeler and Nora Howard.
He was a sheet metal worker and member of the United Church. He liked hockey, baseball, fishing, swimming, shows and reading.
He enlisted on November 15 1943 in Vancouver and he went overseas to the UK on June 2 1944 and he went thereafter on July 11 to France.
Lionel died of wounds on Friday September 22 age 19 in the C Coy near Calais and he was temporarily buried in Hardinghen and on July 31 1945 reburied in Calais Leurbringhen.
At his headstone: AT THE GOING DOWN OF THE SUN AND IN THE MORNING WE WILL THINK OF YOU
His medals were: 1939-45 Star; France Germany Star; War Medal; CVSM & Clasp.
He was posthumously awarded on July 12 1948 the Belgian Croix de Guerre avec Palme for the liberation of Belgium. 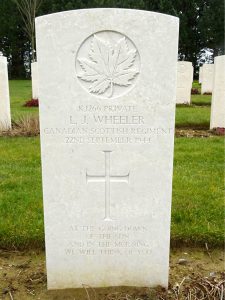